The Girl With All The Gifts - They don't make enough stars to rate this book properly! 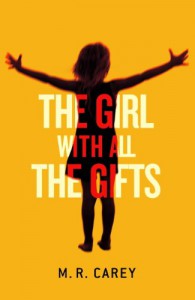 "I could not put this book down" is a phrase that gets thrown around a lot in book reviews. I try to avoid hyperbole and just stick to the details of my experience with a book in my own reviews. That being said, I did put this book down - when I was too tired to keep my eyes open. As soon as I woke up, I grabbed my reader and started again before I even got out of bed. I read it while I was fixing my tea, I read it while I was eating breakfast, I read it while I should've been tending to grownup responsibilities during the morning. And then I ran out of book.

Which is not to say the story ends too suddenly. It ends in exactly the right place in exactly the right way. The entire story has a sense of harmony and balance; not a single word is out of place, every detail is important and what happens to our protagonists happens for reasons that are both obvious and laden with layers of symbolism. The world is sketched in broad charcoal strokes, the visible parts filled in with garish shades of watercolor and then important details are lined in with a fine point pen. The scope of the story slowly escalates from the minutiae of a daily ritual that runs like clockwork until we are casually tossing the fate of humanity around like a rock during a game of hopscotch.

M.R. Carey has always been good at developing rounded characters; this time he's absolutely blown me away with the depth and breadth of the cast he's put together. This is a story that's driven by women and the Jungian Anima - the male characters are (complicated) guns on legs, providing enough Animus to highlight the feminine energy and move the plot along. Which is entirely appropriate for a story set at the end - and rebirth - of humanity.

Pandora is a theme that is mentioned specifically a number of times, which counterpointed the strong Eve subtext. And what's the difference between the two symbols, besides the attitude of the author? "History is written by the winners", and while Ms. Justineau sees Melanie as Pandora untold later generations will remember her as Eve. Melanie and her cohorts are like the fruiting bodies of Ophiocordyceps - tough, resilient, and waiting for a catastrophe to set them free.

This is the best book I've read in a few years. It's worth every scrap of praise it's gotten, and them some.