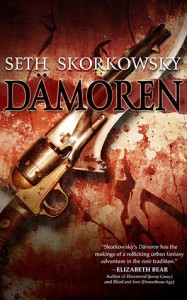 I wanted to like this book; I'm all about dark interpretations of Abrahamaic mythology and the way the war between Heaven and Hell is fought in the human world. But every character we met in the book speaks like Clint Eastwood in a spaghetti western, which is OK if it's handled gracefully and with lots of support. Neither happened in the part of the book I read. It was reading very quickly, and I was concerned I had picked up a YA book on accident, when I ran into this little gem right at the 10% mark:

So, as the crusaders invaded the Holy Lands, they brought with them vampires, werewolves, and other creatures that were virtually unknown to that region.

I'm no expert on mythology or any of the middle eastern cultures, but I've read enough Joseph Campbell and 1001 Arabian Nights to know that white guys aren't responsible for all the interesting things that happen all over the globe. I was on the fence with the book to begin with, but that pushed me right over the edge.